French Macarons Made Easy | Okay, so to start off, let’s get clear on what this post is all about. Macarons are not the same as macaroons.

Macarons (pronounced Mah-kah-RHON) are little round meringue cookies made with egg whites and almond flour. The outer cookie is crunchy with a creamy filling. They are sandwiched together with some kind of filling, usually a ganache, jam, or flavored buttercream. Most often they’ll be colored brightly or with a pastel hue. This is the cookie I’ll be teaching you about today.

Macaroons (pronounced MAH-kah-roon), however, are coconut drop cookies that are chewy and moist. While these are definitely delicious, they’re not what I’m addressing today. French macarons have gained a lot of popularity in the last couple or so years. They’re also known for being pretty finicky to make. For a long time I’ve been wanting to make these, but I’ve been intimidated by them. I’ve heard they’re hard to make, so obviously they struck my interest. I like to be able to make things that most people think are difficult. But I also hate failing. I didn’t want to make them and have them not turn out.

So I set about doing a ton of research ’cause that’s what I do. And you know what? The very first time I made them they turned out perfectly. (Much to my surprise.)

So I’m going to give you several pointers and tips to help you have success with your macarons.

More accurate measuring comes when you weigh your ingredients with a kitchen scale rather than measuring them by volume. For example, one cup of sifted flour will weigh less than one cup of unsifted flour because there’s more air in it and the air weighs next to nothing.

Egg whites at room temperature whip up to a higher volume than cold egg whites. When the egg whites are cold, the proteins in them are tight and it takes more time and force to whip them up. However, cold egg whites separate from the yolk easier. So, it’s best to separate your eggs cold and then let your egg whites sit out on the counter for 20-30 minutes to warm up. In a pinch, you can place the whole in-the-shell eggs in a bowl of warm water for 5-10 minutes.

Use More Food Coloring Than You Think You Need

The color fades when the macarons bake, so when mixing the food coloring in, go a shade or two darker than you want.

There comes a time in the macaron-making process when you fold the dry ingredients into the egg whites. Unlike many other desserts that state to fold until just incorporated, macarons need lots of folding to produce the correct consistency. The more you fold, the more air bubbles will pop and the thinner the batter will get. If you under-fold, your macarons will end up lumpy and cracked and they won’t have the classic “foot” after they’re baked.

If you over-fold, they’ll end up flat and will also not produce that “foot”.  When you lift up your spatula, you want the batter to fall off in a ribbon. The batter that falls off the spatula should sit on top of the batter in the bowl and disappear back into the mass in about 10 seconds. 65-75 folds is about right for me. But it also depends on the strength of your arm. This may be something that will take some trial and error for you. Alright, so after you’ve achieved the optimum consistency, you’ll want to transfer your batter to a piping bag fitted with a large round piping tip. I use a Wilton 2D. Some people can eyeball the exact right size every time, but not all are that gifted. A template may be in order for those who have a difficult time getting them all the same size. You can do this by tracing around a small round cookie cutter onto the backside of a piece of parchment paper. It really doesn’t matter what size you make them as long as they’re all pretty much the same. I like mine to be about 1 1/4 inches in diameter.

After you’ve piped them onto a parchment-lined baking sheet, it is absolutely necessary to let them sit for about 30 minutes out in the open air. They need to form a skin. If they don’t, they’ll spread in the oven. With a skin, they won’t be able to spread, which will force them to rise upward, creating the classic “foot”. Before you put them in the oven, they should be slightly tacky to the touch, but they won’t stick to your finger.

Do Not Under Bake

Bake for the full 20 minutes even if they look done before that. If you don’t, they’ll stick to your tray.

Did you get all that? It’s a lot of information, but if you take it one step at a time you’ll turn out some perfectly amazing and delicious macarons.

Oh, and also you can make these any color you want and the filling can be any flavor you want. Let your imagination go wild! BONUS! They are freezable. Thaw them out at room temperature. 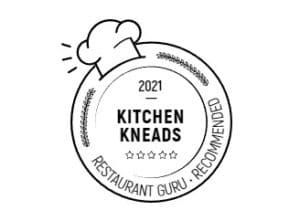